This week, the United States announced that it has reached a preliminary agreement with our North American counterparts, Canada and Mexico, on certain provisions of the North American Free Trade Agreement (NAFTA). One of these provisions focuses on biologic drugs – specifically, the length of time a brand has data exclusivity (i.e. a monopoly).

The preliminary agreement imposes longer drug exclusivity periods, increasing the length of time that brand-name companies have a monopoly over the market. This effectively halts competition, discouraging innovation, decreasing access for patients to needed treatments, and increasing costs.

North America’s generic associations, including the Association for Accessible Medicines (AAM) and it’s Biosimilars Council, the Canadian Generic Pharmaceutical Association, and the Mexican Association of Generic Medicines have rejected this preliminary agreement, stating the “trade understanding between the U.S. and Mexico to extend brand name biologic data protection to ten years will harm patients in our three countries who seek more affordable medicines.”

It’s important to understand that this is just a preliminary agreement – Congress must vote prior to final passage, meaning there is still time to act, preserving patient access to important generics and biosimilars. Encourage Congress to act now to oppose the inclusion of monopoly protections for brand-name drugs: https://p2a.co/0qkkM8w. 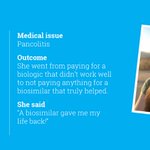